The Future of the Planning System in England: a response to the Commons Committee report from a consultation perspective 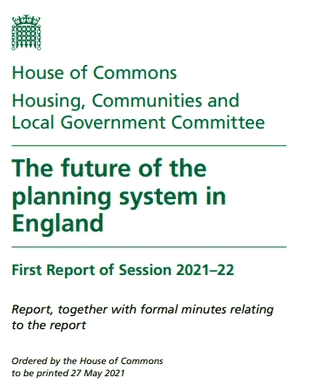 On Thursday the House of Commons’ Housing, Communities and Local Government Committee issued a first report on The future of the Planning System in England.  This follows the 2020 Planning White Paper, Planning for the Future which proposed some radical changes to the planning system.

In March this year, while researching my ebook People in Planning: Considering Consultation Content, I interviewed a range of experts in planning and development on precisely this subject.

Currently, local authorities are legally required to consult at two points before they submit their draft plans for examination: the initial Regulation 18 stage and the later Regulation 19 phase, prior to the Local Plan being sent to the Planning Inspectorate for examination. Under the proposals within the White Paper, Local Plan preparation would be subject to a strict statutory timetable, with ‘meaningful public engagement’ at two points in the process.

Consultation on a non-statutory planning application would ‘streamlined’ (reduced) on the basis that it ‘adds delay to the process and allows a small minority of voices, some from the local area and often some not, to shape outcomes’. Instead decisions on planning applications, in most cases, would be delegated to planning officers rather than considered by a committee.

The principle of ‘zoning’ as outlined in the White Paper is already used extensively in the US, Canada, China and elsewhere in Europe. Some respondents felt that its introduction would be beneficial:

The uncertainly over UK planning applications is very complex compared to most countries. Chinese investors are always very surprised by our planning system as they are accustomed to knowing what the parameters are. In UK its so much more subjective. With more clarity through strategic planning, you could remedy many of the issues faced at a local level.

But consultation lacks visibility, and it seems to me that consulting at a strategic level, rather than on specific planning applications, will only add to that.

To increase awareness and understanding – whether in consultation on a planning application or a Local Plan –  more clarity and purpose is required. We must cease to (be seen to be) consulting for the sake of consulting. Each consultation must have very clear objectives which are made clear to local residents in the form of a consultation mandate.

A hotel developer interviewed felt developers’ consultation would benefit from better communication with local authorities – not solely the planning departments, but with officers working within stakeholder engagement, health and other departments.

Another developer felt that less consultation (limited to an online questionnaire) would be beneficial, because ultimately the local authority then consults on the same scheme.  This chimes with the essence of the Planning White Paper – though the Committee’s report differs on this point.

However, the majority of interviewees disagreed with this sentiment, seeing consultation as an opportunity to iron out any issues that might result in refusal, resubmission or appeal. They, like the Committee, felt that consultation at a development level is still required.

And although the Planning White Paper aspires to more effective consultation at a strategic level, there is much scepticism about whether this can be achieved. In an open letter to the Government in October last year, 14 London planning authorities slated the document as ‘unworkable’ and ‘a threat to local democracy’. Focussing consultation on strategic planning, the authorities said, would offer landowners and developers a ‘fast-tracked route’ to planning consent but at a cost to local communities. Instead, it says, ‘We should be putting communities at the heart of place making, increasing the resources of our planning system and strengthening local democracy’.

Most developers and planning consultants interviewed as part of this research felt that the proposals within Planning White Paper wouldn’t – or shouldn’t – materialise. They felt that strategic planning is too remote to compel local residents to take part and that already-stretched local authorities lacked the resources to run effective consultations.

I struggle to see how we’re going to get local people involved in something that may or may not happen, over such a long term.

Interviewees were also concerned about the risk of not consulting and the community relations issues that this could pose. Consultation is not simply a hoop to jump through.  It has a valuable role in shaping a planning application, creating a scheme suitable for the specific location and mitigating the risk of refusal or appeal.  It’s reassuring that many developers and planning consultants share this view, and I hope that the Government will take this into account when drafting the imminent Planning Bill.

Further insight on this topic is included in Penny Norton’s recent ebook People in Planning: Considering Consultation Content and a summary of the way in which the Committee’s report could impact on the development industry is available on the PNPR website.

Penny is highly experienced in consultation, community relations and public affairs for the built environment sector, having run many public consultations on behalf of commercial developers, housebuilders, retailers and large scale regeneration schemes.