Consultation in 2021: Prognosis and Predictions 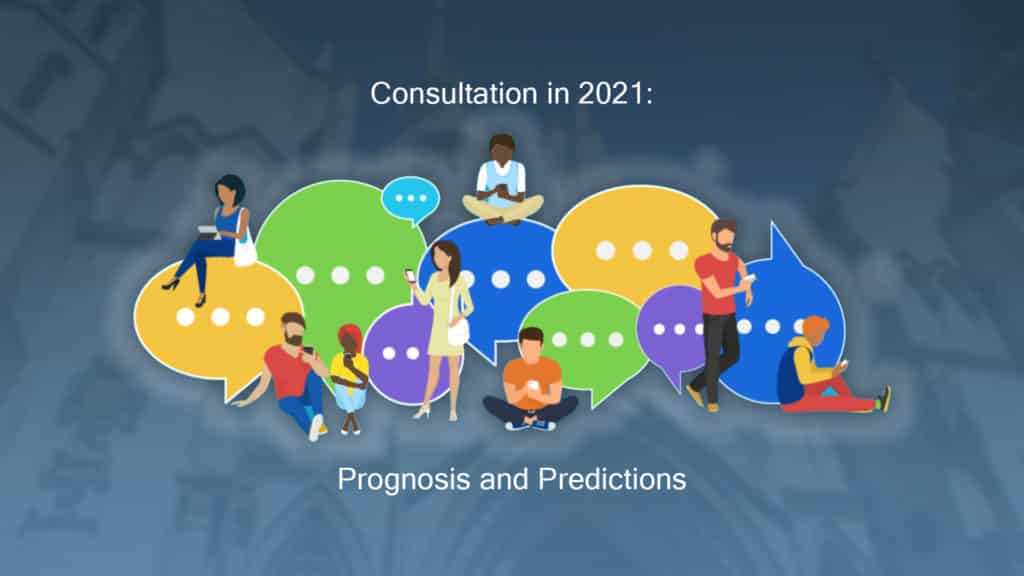 In a sea of uncertainty, the likely future for public consultations is remarkably easy to predict. The experience of 2020 has created a groundswell of scepticism and an increased wariness of top-down decision-making. Few people doubt the difficulties that Ministers, Councillors and public bodies of all kinds have faced. But, as recent High Court cases show, cutting corners can often result in conspicuous unfairness and, frankly, to questionable decisions.

So, in a nutshell, what can we expect from the months ahead?

Much of what we take for granted has been undermined by the impact of the pandemic. Brexit is another change that affects people’s businesses and travel assumptions. Suddenly decisions taken far away in inaccessible places, have a more direct impact upon life and liberty than ever before. Thousands of representative bodies, pressure groups, community associations as well as individuals have been frustrated by insufficient engagement and feel that their views and interests have not been adequately considered. If, as expected, the vaccine allows a gradual return to normality in 2021, people will not just forget and move on. They may instead become more determined to have influence, and the appetite for high-quality engagement will increase, not decline.

The mode-switch that was forced upon organisations in 2020 became a massive boost for the idea of online dialogues, supplementing the online surveys which had already become the favoured data capture method for consultors. Expect the trend to continue as the better consultors learn how best to use the technology, and digital platforms continue to innovate and promote best practice. A backlash is equally likely; campaigners will argue that online methods favour the digitally comfortable and can be unfair to those who are not. As the nation resurfaces from lockdowns, it will be necessary to reinstitute some of the traditional dialogue methods and address the specific challenge of those who are seldom-online.

On average, it takes a public body at least three to six months to prepare for an important consultation. In the NHS and local government, however, the extreme focus on Covid-19 and its repercussions make it very difficult to plan ahead. Many Directors with service delivery responsibilities have been redeployed or assumed additional roles; key ‘comms & engagement’ staff are preoccupied with other, more urgent duties. As a result, critical pre-consultation work may be insufficient, taking the risk that important stakeholders are not engaged early enough. Cutting corners on such activities will be a false economy and consultors may need to find creative solutions to kick-off early consultation planning – using third parties where necessary to avoid compromising important deadlines later in the year.

2020 has seen a considerable shake-out among those who work in public engagement. At the very time when demand for surefooted specialists who can read the mood of local communities and ask them the right things in the right ways, these people may be harder to locate. There will inevitably be greater reliance on consultancies that can offer help, but this does not entirely substitute for in-house know-how and home-grown talent. Upskilling existing teams is clearly one option, and many will invest in on-line learning in the next three months, especially if staff are home working or even furloughed (where, yes, training is allowed).

It may be early to predict, but the second half of 2021 could see a massive number of consultations – especially in the NHS and other services where the experience of the pandemic has led to new ways of working that managers may wish to become permanent. Expect also high-levels of activity by Councils and Government departments as the ‘Green Recovery’ agenda resumes the prominence it was acquiring before the virus struck. COP26 in Glasgow will prove a seminal event, and there will be a rush by public bodies, regulators and even community groups to show how they are considering radical solutions to the zero-carbon challenge. With such a workload, it will be physically impossible to re-invent each wheel in the way that consultors have frequently done. Previous exemplars, case studies, blueprints and templates will become useful ways to streamline consultation processes and will be developed in-house or made available through the Institute in the coming months.

These issues are important for anyone working in public engagement and consultation, so we welcome a debate about our findings.

Let us finish with a few other predictions:

If you would like to discuss these key issues and challenges or would like to find out how the Institute can support your consultation and public engagement activities, please give us a call on [number] or email us at info@consultationinstitute.org.