Flawed fracking consultation ruled unlawful because its scope was confused 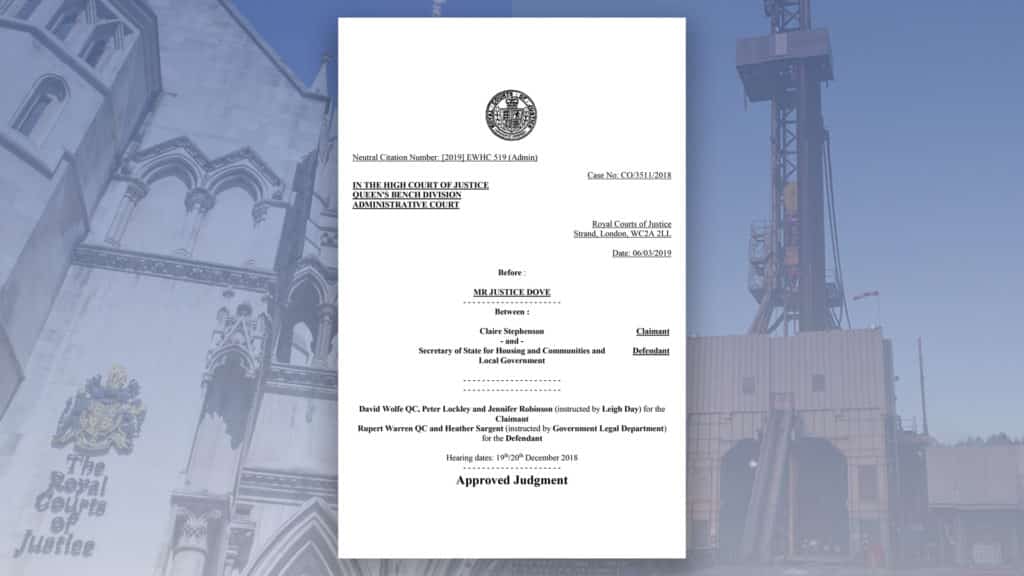 Imagine taking part in a consultation on a policy document and answering a question “Do you have any comments on the changes of policy … or in any other aspects of the text …?”

Would you feel cheated if you then discovered that the consultor had, from the outset decided to ignore what anyone said about the substance of that policy?

This what happened when the Ministry of Housing, Communities and Local Government (MHCLG) consulted on the revised National Planning Policy Framework (NPPF) in 2018.

Talk Fracking is an anti-fracking pressure group that had responded – opposing the incorporation into the NPPF of the Ministerial policy of encouraging the controversial technology in England. When it challenged the consultation, the High Court ruled that it was unlawful for the Government to have sought the public’s views, but then failed to consider the issues raised.

How can a major Government department commit such folly?

Well the answer lies in the total confusion as to the objectives of the exercise – and the failure to check that the questions matched the intended scope of the consultation.

The pro-fracking policy was announced through a Written Ministerial Statement (WMS) by the Energy & Climate Change Minister in 2015. The consultation was run by a different department – namely MHCLG – doing its job of updating the all-important National Planning Policy Framework so that local authorities and others could take informed planning decisions. It published the full text of the draft document and sent it out for consultation, apparently with the intention – in the case of the fracking issue – of only considering views about whether or not the WMS policy should or should not be incorporated.

Now it so happened that there has been huge controversy over the first operational fracking in Lancashire and part of the planning process was a public examination where strenuous attempts were made by the anti-fracking community to show that the Government’s policy could not possibly satisfy the new tougher targets of the Paris Agreement on climate change. The Planning Inspector agreed with some of these and allowed three appeals only to be overruled by the Secretary of State who argued in effect that it was not for the planning process to question Government policy. That, he insisted was a matter for future national policy.

So, when the NPPF went for consultation, it is hardly surprising that those who wished to argue that the science had changed and that carbon emissions from fracking are now thought to be greater than was calculated when the Government’s WMS policy was published should use the occasion to advance their views. Was Talk Fracking merely exercising its right to be heard as a consultee?

Government lawyers argued that it was not for the MHCLG to open up a policy consultation on another department’s subject-matter. But, taken at face-value, that is precisely what they had done. The words in the consultation document, and the questions posed would, said the Judge, need to be viewed according to how a reasonable member of the public might read them.

The Institute will have much more to say about this Reasonable reader test and we have asked our questionnaire design specialist, Barry Creasy to prepare some ideas as to how best to advise our clients to subject their consultation documents to this standard. Public bodies will have to be more careful – especially with Document Review consultations – where they ask stakeholders or the public to comment on drafts or updates of key documents.

At its heart, this is a case about Whitehall confusion, with different teams of policymakers not forming a common view of what they were asking what responses they would be considering. Following the Institute’s Consultation Mandate would have prevented much political embarrassment and saved them the ignominy of losing yet another judicial review.

This was an open and shut case. Clearly, the consultation had misled consultees, and the Department should have settled by either re-running the exercise or mounting a project to evaluate the arguments advanced by those consultees. Instead, yet again, Ministers try to tough it out by fighting lost causes in the Courts and merely demonstrate that officials in major Departments still fail to observe consultation best practice.

The Institute is today publishing Briefing Note 23 for Institute members that considers the case in more detail. If you’re not a member and would like to view the document, please contact us. It will also be considered in depth at the next Law of Consultation training course on March 27th at York