Why are you referred to as Black. Asian. Minority. Ethnic? 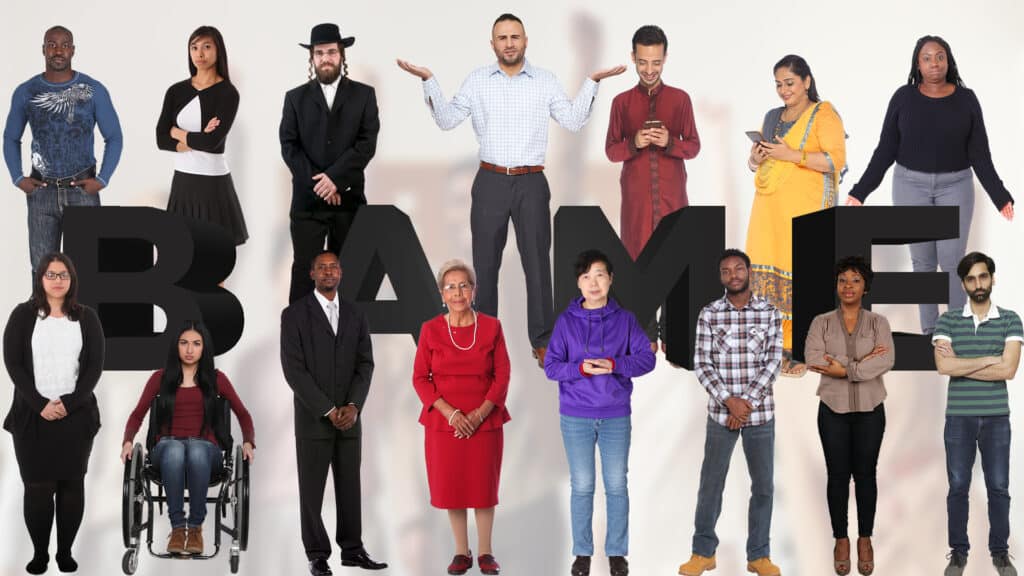 The umbrella term and acronym, ‘BAME’ has taken the effect of categorising a diverse range of minority ethnic groups, such as African, Caribbean, South, and East Asian descent (and more), all into one group. A recent evidence-backed research found the term is outdated and misunderstood by the wider public and not representative of all ethnic groups in the UK.

To put the latter point in perspective, Census 2021 classifies all ethnic groups into 5 broad categories:

Each category is broken down further into individual ethnic groups. For example, Asian covers East Asia (China, Hong Kong, Japan etc), South Asia (India, Pakistan, Bangladesh etc) and Southeast Asia (Philippines, Thailand etc.). Based on this categorisation, the term BAME comprises of 80% of ethnic categories – that is, all but the ‘white’ category, but it does not adequately represent each individual group.

The problem with collective terms like BAME, and other vague acronyms and phrases, is that it allows casual branding of large, culturally diverse groups, implying that ethnic minorities are all part of one homogenous group. Essentially it is seen as stripping people of their identity.

However, ‘BAME’ was never intended as an identity. The original term, BME, was coined back in the 1970s when communities united to fight racism and discrimination prevalent within Black communities – the ‘A’ was added two decades later to represent Asian people (South and East Asians). The term is commonly used in workplaces to address and increase overall equality, diversity and inclusion. For many years, businesses, corporations, and governments have used the term as a way of gathering and reporting data about unequal outcomes, such as in health, pay, employment and education, for anyone who is non-white.

But language matters, and they especially matter when it comes to race and identity.

The term is guilty of generalization. It places recognition and emphasis on some groups, such as Black and Asian groups, while entirely ignoring others, which can have lasting, negative impacts on society.

A prime example of this arose in the context of the pandemic. Government research on Covid-19 disparities, and media outlets disseminating its key findings, reported the disproportionate impact of Covid-19 on ‘BAME’ communities due to poor socio-economic circumstances and exacerbated health inequalities, leading people to think that this includes all non-white groups. In reality, the research highlights that Black and South Asian groups, in particular, are likely to be impacted, compared to the majority population in the UK. Placing all other non-white groups under this term has negative connotations and is hurtful to people, and for a good reason.

The difference between each ethnic minority group is often perceived as physical rather than the various strands of ethnic and cultural complexities of each group. The term, therefore, leaves room for ambiguity and confusion around the nationality, race, and ethnicity. This is while also avoiding the unique experiences and issues impacting individual ethnic groups as highlighted by the recent advocating for change through the Black Lives Matter movement.

Moving away from the term ‘BAME’ – Towards another term?

It’s important to acknowledge that ‘BAME’ no longer plays a role of unification and has lost the appeal it once had. The first step for organisations should be to abandon the term ‘BAME’ and other problematic or umbrella terminology. We should aim to be as specific and nuanced as possible when talking about race.

The search for a new term is certainly underway.

There is an increase in local debates and conversations around preferred terminology between staff members, organisations (researchers, universities; local authorities) and varied communities. The phrase ‘ethnic minority groups’ sits uncomfortably for many due to the negative connotations attached to the word minority, which subconsciously prompts a comparative mindset with white counterparts, encouraging an inferiority complex from an early age.

The arguments for and against using various phrases and terminology highlight the need for engagement and consultation on a wider scale to find nuanced ways of describing ethnic groups. The multifaceted aspects of ‘race’, which covers nationality, national origin, skin colour and ethnicity under The Equality Act (2010), requires an intersectional approach to engagement around the preferred terminology. That is, engaging with varied communities to explore the historical, social and political context of the term and what may be its replacement.

This approach demonstrates a powerful act of allyship and progress in recognising, understanding and embracing the diversity in our communities.

Sheena joined the Institute at the end of 2019 as our Public Policy and Research Officer. In her evolving research-based role, Sheena will be writing articles and commentaries for our newsletter and building case studies of past and future Institute projects highlighting different sectors, pitfalls and law.