A colourful, artistic and potentially dangerous post-script to the LTN controversies? 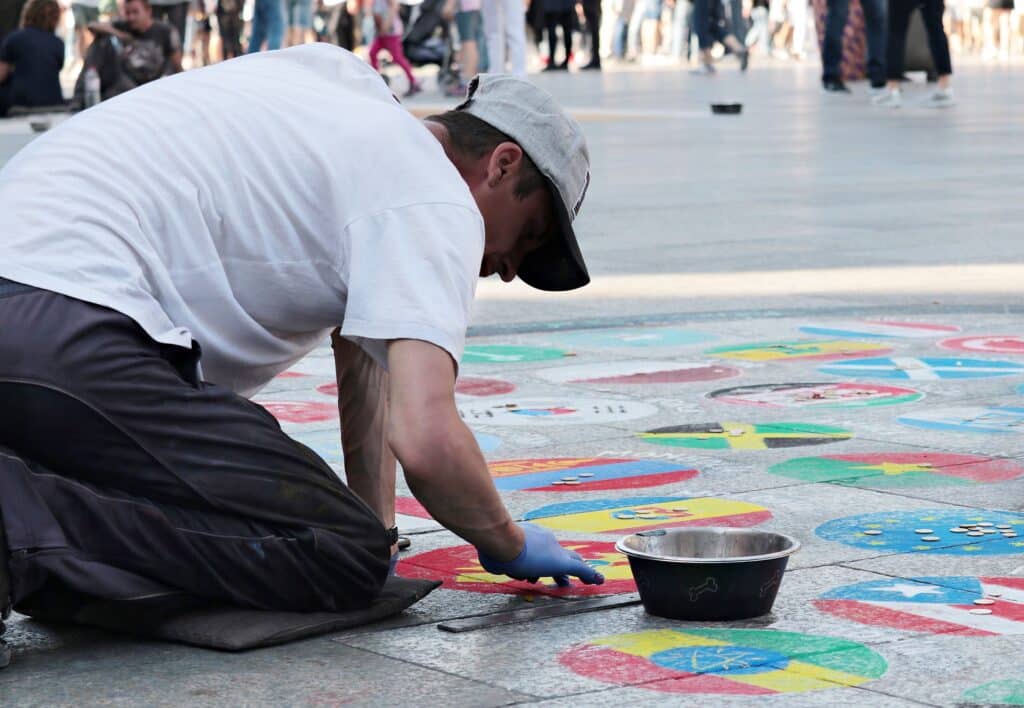 Low-traffic neighbourhoods and changes to street furniture during the pandemic to help people get out and about more have been something of a recurring feature for us over the last year and a half. We’d go so far as to estimate that it is in fact the most common individual issue we’ve written about whether it’s the court cases alleging they have been installed without proper consultation or engagement, a bullish declaration that the London elections had settled the matter, or our debate from a few weeks ago on whether changes to Government guidance and law might substantively have settled the matter. A lot of blue text there, which should illustrate how prominent these arguments have become.

One of the arguments frequently used against the implementation of these measures is that without full and proper engagement with disabled people they can be severely disruptive to individual lives. For a wheelchair user, for instance, the movement of street furniture can block pavements (something which was very much a problem when restaurants and bars were given licenses to spill out of their doors onto pavements). Although local authorities do seem to have become better at taking into account these needs, last week we saw a healthy reminder of the risks of monolithic thinking, of grouping people in certain categories all together.

As part of efforts to boost London’s culture and hospitality sector, the Mayor’s office has launched an ‘asphalt art’ project, where images and artworks are painted onto pavements and roads to brighten up the streets. Sounds lovely doesn’t it? Who could have a problem with that? Well, it turns out it might be one of those things that sounds good but ends up causing significant problems.

A coalition of organisations representing various categories of people with disabilities has written an open letter criticising the project, particularly the colouring of pedestrian crossings on several grounds. They argue that a lack of engagement with their respective communities has led to dangerous situations where visually impaired people might struggle to recognise signage, people with learning disabilities might find it difficult to interpret new symbols and designs as crossings, people with dementia can struggle with ‘misperceptions’ causing falls, and neurodivergent people might struggle with sensory overload. One twitter user stated that she had already been led into a cycle lane by a guide dog confused by a newly colourful crossing.

Although engagement on LTNs themselves does seem to have improved, there seems to have been a distinct lack of it in this case. The equality impact assessment for the project does mention some of the above issues, whilst acknowledging that no complete consultation has been carried out. It doesn’t engage with any of the prior research on the topic and lists only minor mitigations that do not seem to significantly address the major points of concern. Part of the mitigation includes a pledge to continue monitoring feedback from users whilst the project is being implemented.

The importance of properly understanding impacts on a diverse range of communities cannot be understated, and it certainly appears to us in this situation that that has not been done. It’s also perhaps worth noting that at this point there really should be no excuse for it, not only in terms of undercooked equality assessments, but also the general lack of consultation and engagement. The equality assessment does not properly address this shortfall, merely stating that “the fast paced nature of the project has meant that a dedicated consultation cannot be carried out”. Why does it need to be fast paced? It would be far better to ensure that it is safe for everyone, even if it does take a little longer to implement. Even if it’s a ‘flash’ art project where speed is deemed to be artistically relevant, we might question whether this is sufficiently important to permit compromised safety.

What is clear, and what we would stress is that it reinforces the ‘not just a tick box’ nature of consultation and engagement, and that of proper equality impact assessment. Of course we should endeavour to make our public spaces as aesthetically pleasing as possible, but any policy that does this in a manner that potentially shuts off that space to groups of people who cannot enjoy it safely is not a good one. Stopping that from happening? That’s where good, robust consultation and engagement comes in.