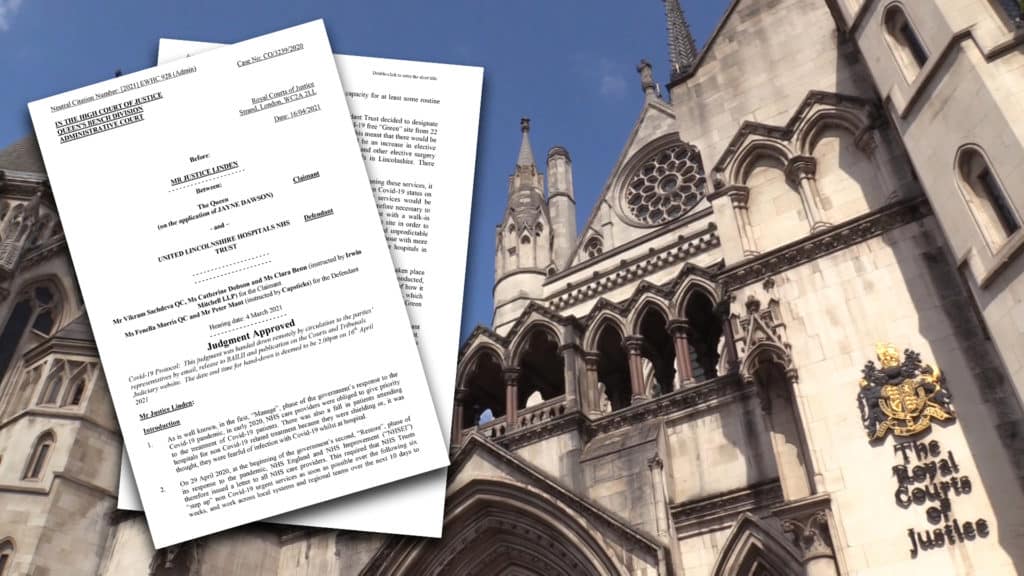 Last Spring, during and following the first wave of the COVID-19 pandemic, hundreds of urgent changes were made to the way the NHS operated. Many services were affected from routine GP surgeries and outpatient appointments to long-planned treatments or surgery. Guidance from NHS England issued just before lockdown confirmed that despite the pressures of the time, the NHS duty to involve was not affected by the pandemic or any emergency legislation, though there might be a case for ‘very limited public involvement’.

Later on as these pressures eased, Hospital Trusts were instructed to re-purpose their facilities to enable a resumption of many suspended treatments or diagnostics, and this led United Lincolnshire Hospitals to plan a significant change whereby Grantham Hospital would become predominantly a ‘Green’ site from 22 June 2020 to 31 March 2021. This would mean a focus on elective surgery, chemotherapy and some diagnostics, but also meant that the Accident & Emergency department would become an Urgent Treatment Centre, obliging about 20% of its users to travel further afield. Other services would also require travel to more distant sites. As context, it should be noted that previous NHS plans to downgrade the local A & E had been resisted by the local community and been the subject of fierce controversy for many years.

The case arose when campaigners sought to demonstrate that the plan had been developed over a period of a month without any meaningful public involvement as required by S.242 of the 2006 NHS Act – which public engagement specialists will now recognise as being Sections 13Q and 14Z2 of the 2012 Act. The most relevant failure was that of ‘ …involvement (whether by being consulted or provided with information, or in other ways) in …(b) the development and consideration of proposals for changes ….’

The Trust, conscious of the contentious nature of the proposal, had developed a communications and engagement plan which asserted that, as the changes were classed as temporary, there was no need for a ‘full public consultation’ but recommended some ‘fairly low level engagement to test out ‘what do you think’ and ‘what are your experiences?’ once the new arrangements were in place. This is effectively what happened, and no meaningful attempt was made by the Trust to engage with the public, still less to involve them in the ‘development and consideration’ of proposals.

In its defence, the NHS argued that post-decision engagement could still effectively discharge its S.242 duty. It also claimed that it was up to the Trust to decide the form in which involvement should take place and that its discretion could not be challenged by the Court unless it was irrational. Mr Justice Linden dismissed both assertions with a thorough review of recent cases (Glatter v NHS Herts Valleys, Hinsull v NHS Dorset, Keep the Horton General v Oxfordshire CCG etc) and relied heavily on the famous Supreme Court decision in Moseley v Haringey.

More topical might be the COVID-majeure argument. To what extent might the consequences of the pandemic be relied upon to justify deficiencies in the arrangements to involve service users and the public? There has already been one important case on this matter, and we think there may be many more. Last year, the Court of Appeal ruled that the Secretary of State was wrong not to consult the Children’s Commissioner about extensive changes to children’s services, and that the pandemic was no excuse. (Article 39 v Sec of State for Education) In the Lincolnshire case, the Court came to the same conclusion. The Judge noted the mandatory nature of the statutory requirement, and that the Trust had failed to show that the urgency of responding to the NHS England instruction or the lack of resources had prevented it from the necessary engagement. Institute members may be especially interested in the following remark by Judge Linden.

‘In my view, considerable caution should be exercised in relation to an argument that Trust personnel were, in effect, “too busy with other things” to comply with section 242. Such an argument runs contrary to the purpose and importance of the section’. (Par 128)

Such evidence as was available suggested that the Trust had not failed to fulfil the S.242 requirement because it was unable to do so, but because it had chosen not to do so. On the facts of this case, it is no surprise that the decision was to grant a declaration that the decision was unlawful. There was no quashing order, as the situation has moved on and no doubt fresh engagement should now be in progress.

As with all judicial reviews, we need to take care in interpreting this case. It is not immediately obvious that the circumstances of this case will be replicated sufficiently closely as to be an overwhelming precedent for other argument about changes made during COVID.

For one thing, the Trust displeased the Judge by failing to provide detailed evidence and a lack of contemporaneous documents. It relied on there having been an options appraisal exercise – but could provide no evidence of any such process. Such engagement as it claimed to have undertaken included radio station interviews, for example, and a short-notice emergency meeting at which some of the written questions submitted by the public were given a response. Here is a Trust that clearly struggled to muster a case for its defence, and one wonders about the advice it received to fight the case. Secondly, one must remember the long history of controversial attempts to downgrade the A&E department of Grantham hospital and possibly, the temptation to use the pandemic as an occasion to implement the NHS’s preferred plan.

Finally, they came to the courtroom of a Judge who was very sympathetic to the much-debated words of Lord Reed in the Moseley v Haringey case.

‘Borrowing his words, my view is that “The purpose of this particular statutory duty …[is] to ensure public participation in the …decision making process” (paragraph 38) and that it is against this yardstick that fulfilment of the duty to make arrangements to secure involvement should be measured. (Par 111)

This leads the Judge in the current case to consider the meaning of ‘involvement’ – a somewhat hazardous occupation in my view. This is what he says:

‘As to what constitutes meaningful involvement, sections 242(1B) (a)-(c) obviously specify the processes in which involvement must be secured, but they also indicate the essentials of meaningful involvement in decision making about the provision of services. Involvement in planning, in development and consideration of proposals for change, and in decisions to be made about the operation of services, are the essentials of meaningful and fair participation in decision making. The statute contemplates that there will be the opportunity for involvement in planning and the development of proposals when they are at a formative stage and in the making of decisions about the relevant matters. It also contemplates that this involvement will potentially influence outcomes and that the views of service users are therefore taken into account by decision makers.’

‘As to the methods by which involvement is secured, I do not regard the words “involved (whether by being consulted or provided with information, or in other ways)” as indicating that involvement is necessarily a weaker concept than consultation. The section is aimed at securing meaningful participation in the relevant decision-making processes. This may mean that the service users or their representatives are party to the decision, rather than merely being consulted about it, but it may mean that at a given stage in the process of involvement it will be sufficient to provide information. However, it would be an unusual case in which it could be said that the provision of information, without more, amounted to securing involvement in decision making: usually it will do so if it facilitates participation in that decision making but not if service users are merely told what the plan, the proposal or the decision will be and they are to have no further involvement …’ (Pars 108/109)

I have underlined the most interesting words. They accord with the importance the Institute attaches to the duty to involve in the NHS. But they also go somewhat further than other Judges have been comfortable to prescribe. So one waits to see if Courts will follow this analysis or maybe distinguish this case from others.

For these and other reasons, the Grantham hospital case is worth considerable study, and is, at the very least a cautionary tale for any parts of the NHS – in any of the home countries – that think they might escape scrutiny if they shortchange local communities on public and patient involvement in service changes during or as a result of the pandemic.