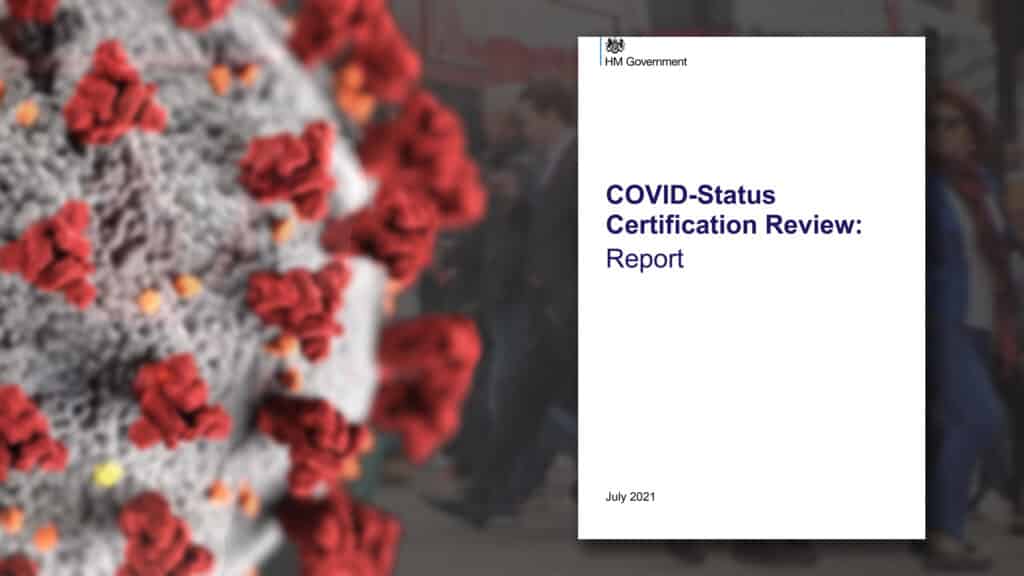 It’s a topical subject. No doubt about that.

Which is maybe why there were 52,450 responses to the ‘Call for evidence’ consultation held for two weeks from 15th to 29th March (on the MIDAS database).

By any standard, this is a large response

On 13th July, the Cabinet Office produced its report on the Review, part of which had included the ‘Call for evidence’

Here – in full – in what it says about the Call for evidence:

A call for evidence ran from 15 March to 29 March, and received 52,450 responses. Over 99 per cent of responses were from members of the public writing in a personal capacity. Most individuals who responded to the call for evidence expressed strong views against certification, largely based on an assumption that certification would be based only on vaccination status (so-called “vaccine passports”). A smaller number of members of the public wrote in support of the use of certification as a tool to help reopen the economy and society safely. In contrast, public opinion polling showed support for “vaccine passports” in a range of settings.

One of the main purposes of publishing an analysis is for decision-makers – and the public to understand the arguments and, literally to see who says what. Many Government consultations these days do not solicit enough respondent information to provide sufficiently meaningful analysis, but in this Call for Evidence, the first question was as follows:

Which of the following best describes the capacity in which you are responding to this call for evidence?

The review has been informed by evidence gathered from in-depth interviews and roundtables held with academics and specialists from relevant fields, from the experience of other countries who have introduced or are introducing their own systems of COVID-status certification, and by a public call for evidence

So, in addition to the 52,450 responses, there were others with potentially more influence on the Review. Nothing in principle wrong in this, but the lack of transparency as to who they were, how were they selected, what did they say etc, begs several questions as to whether the Government policy is informed by a close study of what consultees have said.

Those with an interest in the subject (and that must be rather many in current circumstances) will find far more insight in the 10th June Report from the House of Commons Public Administration and Constitutional Affairs Committee. It took oral evidence from Michael Gove, senior civil servants, academics, and a few business voices. But this was not a consultation. The Government’s own WAS a consultation – and the output has not been properly analysed and published.