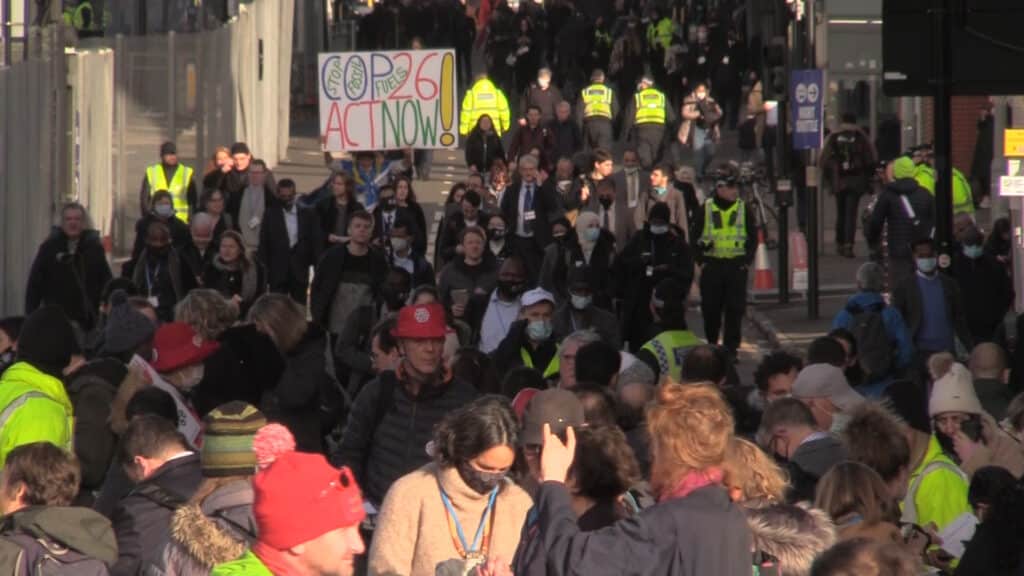 They finally agreed upon the COP26 text on Saturday night … amid angst and recriminations following the last-minute change to words about coal.

As ever, the politicians and diplomats wrangled over words in a document, with considerable debate as to whether they make a blind bit of difference. Thousands of young people – and others – marched to the Blue Zone to express their views, mostly convinced that Greta Thunberg was right to call it all Blah Blah Blah. Just like all the other diplomatic negotiations.

The optimist, in contrast, sees these particular agreements as having lasting significance, being, in effect the lowest common denominator for worldwide action on the existential threat that is climate change. It’s an agenda-setting framework, and the reason why so many participants at Glasgow felt positive despite the ultimate setback is that the UN process clearly now changes gear with the emphasis moving decisively towards implementation.

So, the language is now about ‘adaptation’, ‘empowerment’, ‘mitigation’ and ‘transparency.’ There is no overarching explicit commitment to ‘public engagement’ as such, but it gets close. In the preamble, it says …

Parties should, when taking action to address climate change, respect, promote and consider their respective obligations on human rights, the right to health, the rights of indigenous peoples, local communities, migrants, children, persons with disabilities and people in vulnerable situations and the right to development, as well as gender equality, empowerment of women and intergenerational equity,

There are some interesting specifics

That is about legitimising civil society to campaign and advocate for change.

The Action for Climate Empowerment is a label for the six priority areas of Article 6 – identified almost 30 years ago, They are education, training, public awareness, public access to information, public participation, international cooperation, and suddenly this becomes the focus for many countries who concede that without vigorous action on these matters, behaviour change is almost un-doable.

No doubt inevitable given the evidence that young people feel most committed to climate mitigation. Special events including a Youth COP were held just before the Glasgow conference.

Few people unfamiliar with the process realise how massive is the issue of indigenous people in climate matters. This is because of the enormous burden they have borne in having their lifestyles and culture affected by extractive industries, fossil fuel exploration and production and habitat degradations. They are angry and vocal. Many of their demands are yet to be addressed, but their voices are having to be acknowledged. Note that this is the provision that uses the term ‘actively involved’

That last provision, and the others above reflect the fact that many countries lack the tradition of inclusive public engagement we have inherited. They are the result of sustained lobbying by assiduous groups who demand a role in decision-making. And we should look carefully at each of those paragraphs and ask ourselves whether we have any right to be complacent. As climate change mitigation moves from declaratory statements to executive initiatives, public involvement will be of paramount importance, and there are insufficient, experienced people around to make this process work well.

The Institute has looked very carefully at the emerging requirement. Local authorities have faced huge financial pressures in recent years, and now have fewer staff with sufficient experience. Councillors, elected in the past decade have similarly received less training than was routinely available in earlier times. Community leaders, environmental pressure groups and campaigners are also uncertain as to what standards they can expect. Crucially, too many are still unsure when it is appropriate to engage informally about behaviour or policy change … and when a legally enforceable consultation is required.

To address these, we are announcing a brand new scenario-based training course called  Consultation & Engagement on the Zero-Carbon Agenda…. It will be available either virtually or in traditional classroom mode, and uses the same management-game techniques that gives participants a taste of real-life decisions that a typical local authority may face in coming months. More information is available from the TCI office. Contact Michelle de Branco on michelle@consultationinstitute.org

To watch our video from COP26, please click here.